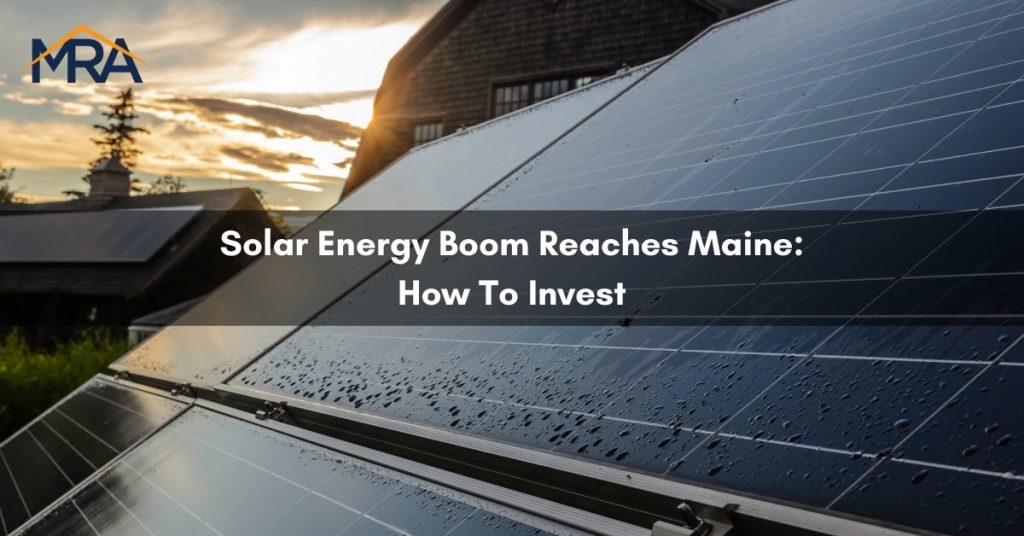 Maine leads New England with 900 megawatts of installed wind capacity, by far the most in the region. However, our state produces only around 55 megawatts worth of solar energy–the least in New England.

The new goal: more than 400 megawatts of distributed solar power and numerous updated guidelines making it easier for both residential and commercial solar energy to proliferate much more readily than has heretofore been the case. (Be sure to read more about the “solar land rush” maps we have produced for the use of our clients below).

For perspective, Maine produces “less than half as much as tiny Rhode Island.” Straight talk: Maine ranks in last place for solar energy, solar energy development jobs, and solar-related economic opportunities. But, get ready, because solar power is coming to Maine in a big way due to the summer 2019 approval of a bipartisan solar energy bill (LD 1711), approved by the Maine legislature and signed by Governor Janet Mills (D).

Josh Soley of Maine Realty Advisors (MRA) lays out the macro effects clearly: “There is a scramble nationally and internationally for land in Maine because of the solar building boom,” he says. “It’s fully underway and will continue for some time due to state-funded grants guaranteed by the federal government to support the growth of the solar market in Maine. There are national companies specializing in solar development and, with the passing of this new incentive, they are coming here and buying options on land in hopes of winning the auction process to get these pieces of land outfitted for solar.”

This will no doubt affect the commercial and industrial real estate industries. Agencies and investors need to think ahead to keep out-of-state funding coming into Maine, while also planning ahead to build Maine’s solar production and attendant real estate needs in a sustainable way. The good news: our state is poised to do just that.

“Maine is in a really good position. The governor is very renewable energy-friendly and wants to make the state a notable factor in the game, so she put in place things that have made the option of using solar in Maine competitive,” says Frank Urro, vice president of energy strategies for NRGTree, a team of renewable energy financial analysts based in Massachusetts. “It’s market-driven: Solar companies submit bids and the winning bid is accepted into the pool. Utilities are going to get a good price on the energy and so are consumers.”

When it comes to what this means for commercial and industrial real estate in the state of Maine, we’re talking about caps on solar projects escalating from 660 kilowatts to two megawatts; community solar projects were limited to nine members per project, now up to 200 are allowed; up to 125 megawatts of large-scale solar arrays for single customers with municipal, commercial or industrial sites; and the bill directs 10 percent of larger-scale community solar farms be reserved for low- or moderate-income residents.

In response to what we at MRA expect to be a rising wave of property purchases related to solar power-generating capability, MRA has created GIS maps that cross-reference multiple relevant factors. These highly proprietary maps constitute a unique reference point for investors looking to enter the market based on the new solar energy regulations and realities. Using these maps and models to help clients identify solar-ready properties, MRA is ready to help direct the purchasing, selling, or leasing of any and all solar-ready properties in the state of Maine.

To do so, MRA looks at certain factors pertaining to each piece of ground: A) Size of the parcel? What’s in the ground? Is the land developable? Flat enough to build? B) In near proximity to the power grid, a substation? Necessary hours of sunlight? C) Local zoning issues and the political realities of local municipalities and governmental organizations, and more. The upshot of all this? Buyers and sellers need a plan to get the most out of this critical moment in the growth of Maine renewable energy, especially solar. Here at MRA, we have just that.

Thanks to the intensive planning and research we’ve conducted in the solar renewable energy sector, MRA has the info our clients need to be successful in this market. “There’s going to be more and more of a scramble for solar throughout the state of Maine,” says Soley. “[Governor Mills] has made renewables and, specifically, solar a priority. To make this happen, land is needed, roof space on large commercial and industrial buildings is needed, and land by the water is needed.

“Make no mistake, this entrance into the solar energy market is going to impact Maine real estate immediately and for years to come,” he continues. “There’s going to be more and more of a scramble for these parcels, which is very positive for the state, taking land that historically hasn’t had much financial value and making it worth something.”

All of that said, if you’re thinking you’d like to take part in Maine’s solar land rush, it’s not going to be easy. “If you don’t have land under option already, you’re out. The initial purchases have been completed,” says Soley. “Now, people are finalizing permit applications to develop the land, and the state is considering permits based on the amount of energy individual properties will produce.”

The good news: that’s just the first round. There are more rounds of solar energy-related development to come. It’s a complicated and ongoing process that will twist and morph over time based on myriad factors. “Maine is going to become a trend leader in the renewable energy sector around the country and the economic impact in our state will be tremendous,” says Soley.

Here at MRA, we’ll be staying up on every last development in this federal- and state-fueled solar energy developments and its impact on real estate across Maine. We’ll be keeping track of how different towns and municipalities react, i.e. permitting might take a year in Portland, an hour in Caribou. There will be more and foreign investment flowing into the state and, while we welcome that, we as a community need to understand and manage it. One thing we know: this is a new era in the state of Maine. “We are already a leader in renewables when it comes to wind, and it’s going to happen with solar, as well,” says Soley. “We are ready for that and, because of that, so are our clients.”

At the end of the lease (say, 20 years), it’s an economic decision that will be based on the state of current technology at the time. Maybe the best thing is to change up panels and use higher-tech panels to produce more energy and increase the value of the property. Or, maybe not.

Urro goes on to note that the strongest solar energy-producing states are Massachussetts, New York, New Jersey, California, and, now, “You can add Maine to that list with some of the best incentives out there,” he says. “Maine is now a leader in the solar industry and will become more so thanks to both the governor and this investment by the federal government because, if you really want to see widespread adoption, it has to come down from the federal level.”

I’ve been in the industry 30 years so I can sound jaded, but there are political pressures at play and if it doesn’t come down from the top you won’t get widespread adoption even though it’s a good play at every level: for the economy, jobs, local manufacturing, good service jobs, healthier.

What we do, found over years in the industry, if you want to get adoption you can’t do it on the green platform. Everyone wants to be green, but are also driven by the numbers, the economics. We focus on financial modeling, go into an organization and develop a financial model for their portfolio of properties and show them the money they’re leaving on the table, or water under the bridge, that’s easy to capture, they’re just not aware, do so using onsite renewable energy generation. We give them the model, they take it to the bank, and get the money. The ROI is fabulous. We prove it from a financial analytics point of view. Then we take the project and put it out to bid, use local installers on the project, and work with multiple financial companies to lock down best financing model, so the client gets best ROI, putting everything out to bid and managing the project, getting best equipment and service, everyone bidding on same quality, any tech being landed on owners’ property.

The technology is good and getting better. People always ask if they should wait a year, will quality be better? Looking at history, you’ll see the technology improvements have been incremental, not huge breakthroughs and if you map incremental changes to cost and incentives, will notice incentives decline as newer technology becomes more commonplace. It really doesn’t make any sense to wait because the longer you wait, the more depreciated incentives become. 30% tax credit in Maine went to 26%. The Cost of panels came down, but taxes went up. That’s federal.

We work with commercial industrial mostly, but also residential. It’s becoming more accepted for businesses, more biz owners know about the benefits. I’ve done presentations in rooms where the likelihood of you having someone in the room that has solar on their commercial property or house is fairly high. There’s usually at least one person in the room that has it and they’ll speak to the benefits of it, that it makes complete economic sense.

Length of this? Depends on the nature of local government, so if their goal is to reach carbon neutrality, the land rush is going to be around for a while. What they found in Massachusetts, wanted to tame the land rush, modified incentives so larger incentives are on rooftops and parking lots and on large parcels of land with big systems. They actually created sort of a disincentive. Now here people don’t look for land, they look for large, sprawling rooftops. The state utility will review their position over time, decide whether or not they want to continue to use land or shift as they did in Massachusetts.