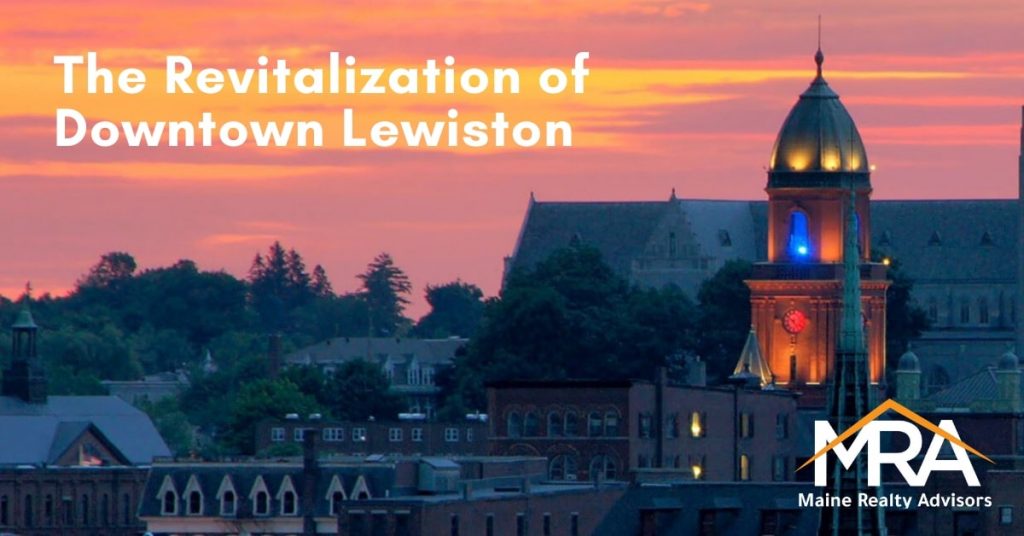 Did you know Lewiston, Maine, just logged one of the city’s largest sales of all time at a cool $6.38-million dollars on a 20,000 sq.-ft. property, “The Lewiston Gateway”?

This purchase is just one of many signs that the Lewiston-Auburn metro area is already seeing major growth, and more is on the way.

It’s zero shock to anyone that Portland is experiencing a development boom. Projects are being launched at a serious pace that’s only increasing over time. “In Portland, the permit process takes more than a year,” says Josh Soley of Maine Realty Advisors (MRA). “In Lewiston, they want the business and are encouraging it to come their way.”

Creating a strong, effective, and fast approval process for permits and other necessities of development has been a priority, says Lewiston’s director of economic and community development, Lincoln Jeffers. “Our philosophy is simple: Meet the requirements, you’ll be approved. When a proposal comes before our planning board, it’s almost always handled in one meeting.

“Developers and civil engineers appreciate it. It’s a predictable process, [which is] not so common everywhere these days. Tax Increment Financing (TIF) is another tool: we use it judiciously, consider return on investment, and evaluate the need for municipal support for a project. We’re not going to do it if a developer is making a fair return on their own, but if they’re dealing with high site development costs, or other issues that may require mitigation, we are always happy to talk.”

As is true of many towns and cities in Maine, it’s the renovation of large-scale, historic mill properties that have turned what had in some cases become local eyesores into economic assets and helped power the growth of surrounding institutions and businesses.

The buyer? Another Maine-based real estate company by the name of Remington Street Properties. MRA will continue to be involved in the management of the building, which will be insulated, renovated and whole floors made into larger spaces for prospective commercial tenants.

Why are so many out-of-state developers (and more) busy executing projects in Lewiston? Hypothetically, though based on facts, a 20,000 sq.-ft. office building in Portland would have a purchase price of around $5 million. That same property in one of the largest cities in Maine besides Portland? Around $500,000.

“At MRA, we’ve been forced to venture outside of the Portland metropolitan area to find better returns for our clients,” says Soley. “There is a great deal of competition downtown, and with all eyes on the Portland market, we can source deals below the radar in secondary markets.

“Lewiston is a great place to incubate young companies. I see people being priced out of Portland and moving to Lewiston, not just residential tenants, but commercial offices, healthcare corporations, and large-scale retailers,” continues Soley. “We’re earning returns in Lewiston that we wouldn’t typically be able to get in Portland.”

“It’s not our first choice, but it’s what we need to do for our clients,” says Soley, noting that Lewiston has an extremely intelligent economic growth and development division led by Jeffers. “Lewiston has instituted programs for landlords, including historic facade restoration, micro-enterprise and a commercial loan program for improving properties in the downtown area, especially for businesses bringing employees downtown.

“There are so many different forward-ranging projects, initiatives, and campaigns going in Lewiston right now, you can smell economic opportunity in the air. Historic buildings are being brought back to life all over the city.”

Instead of the smoke that used to issue from the mills, reams of data now stream in and out of the offices of large companies like TD Bank, a Canadian bank that has invested heavily in the New England market. Also, more sizable companies like Community Health Options, Cross Insurance, and Ground Rounds have made Lewiston home and are offering high-paying jobs, benefits, as well as opportunities to grow and thrive.

Some like to shop, some like to go to movies, but everybody eats, and the dining scene in Lewiston is diverse for the area, and restaurants have come on strong across the board. Critically acclaimed and successful for more than a decade, chef/owner Eric Agren turned his restaurant, Fuel, into a Lewiston fine-dining institution and his legacy helps power culinary arts in the city.

Agren took a break to spend time with family in 2018 after more than a decade of churning out some of the best food in the state of Maine. “When he opened, people said he wouldn’t survive,” says Jeffers. “Instead, he thrived and everyone who ate there, as well as those who didn’t, benefitted from his commitment to both food and this community.” Niche retail has a way to go in Lewiston, Jeffers admits, but the signs are all good, as when Agren’s restaurant closed, Cowbell Grill & Tap opened right up in its’ place.

“In short, the downtown revitalization of Lewiston continues to gain steam. Compared to Portland and similar communities like Biddeford, Saco, real estate here in Lewiston is still affordable,” Jeffers continues. “We have a very walkable historic downtown, we’re close to the river, and I believe it’s recognized that this is a community in the process of a Renaissance.

“People want and need that vitality to stay or move to a place, and there are choices you can make for quality of life,” says Jeffers. “It’s very easy to live here and commute to Portland or Brunswick. There are also plenty of employment opportunities here between the hospitals, businesses that are expanding and hiring, Bates College, and so much more.”

Soley agrees the economic development prospects of Lewiston are high and is looking to what comes next: “What Lewiston needs is additional investment, more apartments to house the people working in these renovated mills and elsewhere that are being reclaimed, and those yet to be hired. I’m seeing businesses grow there and then move into the Portland market. Lewiston is a town that has scraped and clawed its way back into relevance—and that’s a good thing for the entire state of Maine.”

Due to the transfer of real estate long held by one and/or a few entities, an increasing number of historic buildings in Lewiston are being brought back to life by multiple developers, helping to provide a setting for prosperity from top to bottom, boss to worker, local restaurant owner to the auto repair shop. Everybody benefits.

Here’s a look at some of the developers helping make this boom happen:

Maine Realty Advisors is proud of our efforts in the Lewiston-Auburn. We look forward to playing our part in helping all of Maine thrive. We relish the challenge and look forward to engineering solutions for your commercial and industrial real estate here in the Great State of Maine! “In the end, we’re all partners in this effort to make Lewiston the best it can be for every person who lives here,” says Jeffers. “We’re all working to plan ahead, hear and react to concerns, identify issues, then address them.”